Support Cards are the game's way of allowing the players to transform the state of the board. There is always going to be an element of RNG when drawing cards in Cattenburg - which is part of its charm. However, it can also feel frustrating when RNGesus isn't on your side and you draw cards that dictate the fate of the game. To help give the player some control in times like these, we introduced support cards. Support cards that do not cost Action Points  and can be played on top of already revealed slot cards. The catch: there's often some element of RNG to these cards and they are limited in numbers.

Support cards were a feature in the original game jam version of Cattenburg. The way they worked were as follows:

The idea behind having 3 support cards was such that the player had a variety of cards to choose from. It also allowed a player to pool cards: to not use the support card as soon as they received them, so that they could have more choices when they really needed to impact the state of play. A party can play any number of support cards within a turn too, which meant you could use 3 if desired.

There were a few downsides to the existing system.

We wanted to address these issues, along with incorporate the deck building concept into the support card logic.

There are some elements of the new support card logic that has not been decided upon, however - the general changes we've made is as follows:

Support cards are still dealt to the player each turn. A player will have a set amount of "recycle charges" they can play, which will discard their current support cards and draw new support cards in their place. A party can choose to replenish their "recycle charges" once per turn also by spending an action point. This essentially gives players the ability to cycle through their support card deck, whilst still placing some restrictions on how that is done - and allowing elements of chance to play a part in the drawing of support cards.

The main are we are unsure about at the moment is whether a party has 3 or just 1 support card available to choose from at a given point. 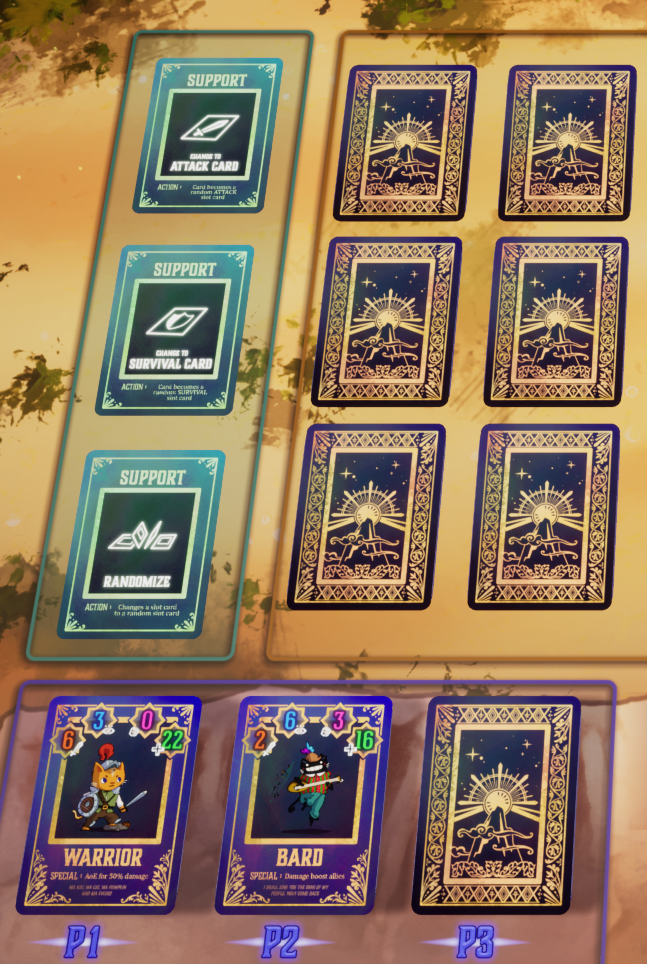 Essentially, the amount of cards available to the player is the same as the 3 support card example. The difference here is that you can only play one support card per turn, and need to make a decision on whether you want to use a support card or risk drawing for a potentially better support card. 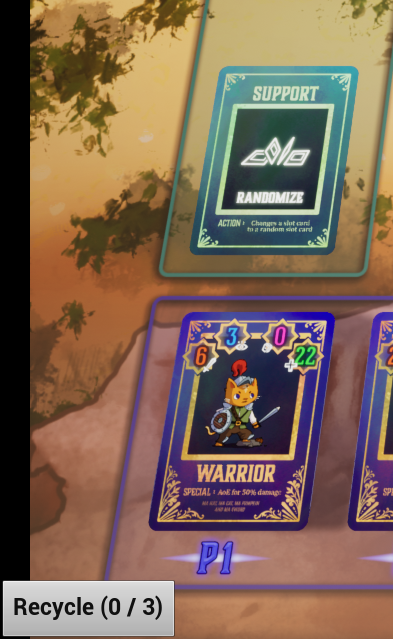 Example play:
Player currently has 1 support card (A). At the start of their turn, they do not draw a support card as they already have one. During the turn, the player decides they want to try and find their "Undo" support card. They recycle A, and get card B. Card B is not Undo, but is a desirable support card. The player must then choose do they want to use the desirable support card B, or keep looking for the undo card. They decide to keep looking and recycle card B to get card C. This decision means they know they will not be able to use card B now as a backup option. Card C was not what they wanted too, so they decide to spend 1 AP to replenish their recycle charges. They use another recycle to discard C and draw card D. They discard D and draw E. They have another recycle available, but decide to use support card E. Now they have 0 support cards, and therefore cannot use their remaining recycle charge. Recycling doesn't draw when you're on 0 support cards.

For now, we are going to try the 1 support card approach. We will need to decide on how we present this to the player too - whether we use a UI button or whether we create a physical "deck" that sits on the board that players click to draw from. However, it will be important for us to get some hands-on feedback before we invest time on user interface decisions!

We still hope to get a testable build done by Christmas. This will be accessible to those on our discord server 💕