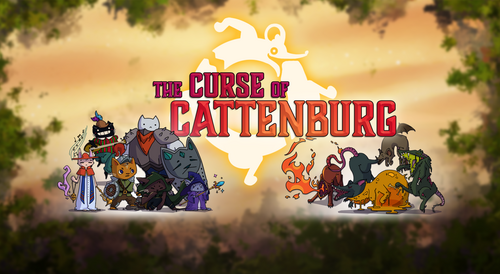 We were really pleased with how The Curse of Cattenburg ranked in Ludum Dare 47. We've never had so many people say they would enjoy playing a fully-fleshed version of the game, with some even saying they'd pay for this sort of game. The game was something we all enjoyed making too, I think it feels satisfying to come up with a relatively original game concept and bring it to life. We pushed to squeeze a lot into the game, in typical Brainoid & HonestDan fashion, which was at the time stressful but now feels worthwhile. The amount of personality and polish that was added with the amazing work of Spacey3d made such a huge difference.

However, with that said, there were elements of the game that were included just in order to satisfy the theme of the gamejam, or because we lacked the time to implement our original ideas. In this post, I plan to outline the things that we are looking to change about Cattenburg as we leave the jam version behind us.

The board game element was something that was added to satisfy the theme of "stuck in a loop". However, we did always want the game to be about a series of battles that you party would travel between, with your parties health persisting between battles. We wanted the party to be able to acquire new party members and the ability to level up existing party members. The way it was added into the board game wasn't particularly bad, but the major downside was we really took a lot of the choice away from the player due to the nature of the board game and dice rolling. The different events of the game were experienced by landing on a specific tile - but the player had no input whatsoever on whether or not they would land on a specific tile.

Looking forward, we would like to create a world where the adventurers can choose their path whilst adventuring. Not an open world, as such, but more a branched network of places, connected by paths. The player can look at the map and see what type of events or locations are ahead, and make decisions which direction they wish to go. This gives the player the decision making power back again, which we feel is important from a player experience perspective. It also allows for some strategic decisions to be made. Do I go left, where I can heal the entire party? Or do I go right, where there's no heal but a dungeon that may hold valuable rewards? Either way has its pro's and con's, but it was you who made that decision. It gives a sense of reward for good decision making, and also a desire for future improvement after bad decisions.

We felt the revealing cards on the board and playing your character on the revealed cards mechanic was pretty original - and pretty integral to the games identity. It gives an original twist on the concept of drawing your hand and allows you to take advantage of previously revealed cards. Though through seeing people play the game over Ludum Dare, it became clear to us that quite a few things need to be refactored going forward.

One of the most confusing things for the players was the targeting system of using P1, P2, P3 or E1, E2, E3 cards. This is something players could learn over time, but its also perhaps a needless barrier that confuses new players. We have two approaches in mind to simplify this:

Change them to attack slot 1, 2 or 3 cards and defend slot 1, 2 and 3 cards:
The benefits of the attack/defend cards is that the intention is clearer - you will attack if you place your character on an attack card! We too often saw players playing a character on a P2 card, expecting it to attack the enemy in slot 2.

Allow the player to select the target of an attack manually:
If we allow the player to select the enemy they wish to attack, it would give more control the player and there would be less confusion. The downside to this is that we are adding an extra "step" to playing a character which impacts the flow of the game somewhat. More importantly, however, it may impact one of the quirks of the game - which was you have to make the most out of the cards you've got, meaning you can't always focus down the enemy you desire to kill first. It would also mean we'd potentially need to re-design a lot of the targeting cards that already exist, as they would become redundant.

Another aspect of the game we noticed needed refinement was the amount of Action Points available to players. Revealing a card and playing a character on a card both cost an action point, and we found that players were often in a position where they could only reveal as many cards as they had players. This really took away a lot of the decision making for players. Whilst they could strategise about what player would be best to play on which card, we feel it would be more interesting and give players more options to strategise if they were able to reveal more cards. Our approach to this is two-fold: give players significantly more Action Points, but also vary the cost of playing your character on a card.

The game itself is something we feel we'd like to be played repeatedly. In a similar fashion to games like Darkest Dungeon or Slay the Spire, it would be great to have the card game mechanic be the core of the game - but for their to be a really enticing reason to keep playing.

We aren't 100% on the direction we are taking with this, but for now we are likely to lean more towards the Slay the Spire approach - where each run is a clean slate and you can build up your characters and your deck during the run. This means your choices each run are limited, in terms of what characters you find and what cards you'll gain, and that part of the strategy comes in the decisions you make along the way. It also means that the game itself has a distinct session, meaning each new run can feel a clean slate full of opportunity.

Deck building is something I find really interesting personally, and is something we'd love to bring into Cattenburg. For this to work, we'd need to implement the concept of player and enemy decks, and that the cards laid out come from those decks respectively. We are also toying with the idea of a "shared deck" too. This would mean players can reveal and play on any of their cards or the shared deck cards. This means we preserve the memorising cards aspect of the game, whilst still letting players build decks that are specialised for their own party. We are also exploring a way of designing the cards so that players would be able to reveal and play on enemy cards if they wish, and vice versa.

Our first goal has been to strip out the board game mechanic, so that we have the card game isolated. This will allow us to build on the game and iterate over some design ideas in a more efficient manner. We can create builds and get feedback faster, without players needing to play through the story of the game jam version.  We have also been working on refactoring and cleaning up the code with the aim of making it more maintainable and expandable.

If you want to keep in touch with the project, follow the game here on itch. We also have a discord server, where you can chat with the devs, chat with other Cattenburg community members and give feedback and suggestions.